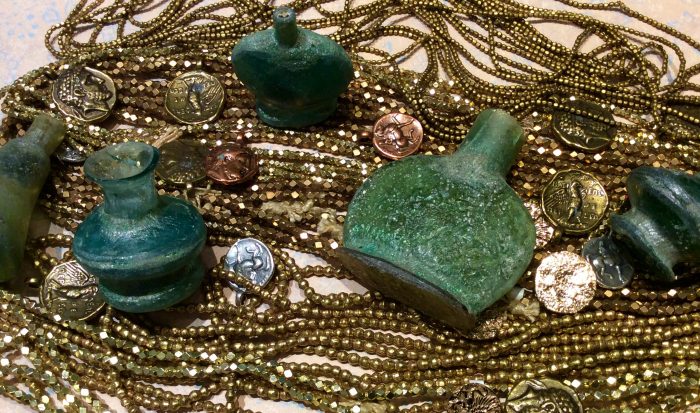 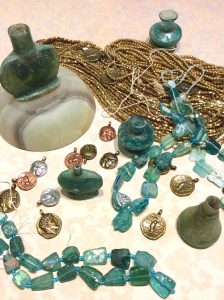 Roman glass is highly valued for its beautiful colour as well as its antiquity. In jewellery making, it is often sold as individual pieces or shards that have been drilled, but these small bottles are very special since they are completely intact. Crafted 2000 years ago, these small Roman glass bottles are beautiful and exciting finds from Afghanistan. In this period, Romans would bring glassware to Afghanistan to trade, as it was a highly important trade hub at the time.
While glass making had been around since the 15th century B.C., glass blowing as a technique was invented in 50 B.C. by the Phoenicians. In the first century A.D., Rome became a major glass blowing centre in the Roman Empire and Romans began using glass blowing techniques to make a variety of items, from drinking vessels to windows. Glass blowing was more efficient and therefore made glass items easier to produce and more affordable. 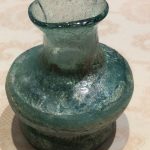 Small bottles like these were likely intended to hold perfumes or oils, and even smaller ones can be found that would have been worn around the neck on a string.
Roman glass comes in many colours, including blue, teal, green, and amber. The most common are the green-teal shades, which is exactly what we have here at Country Beads. Cobalt blue is among the rarest as it was the most expensive to produce, and similarly rare amber-coloured glass is desirable for its golden shine.
One of the most beautiful aspects of Roman Glass is the patina. The rainbow of the patina highlights the colour of the glass, and almost looks like a man-made coating or effect. However, it is completely natural – the iridescent layer forms on the outside of the jars as a result of the chemical reaction between the glass and the soil around it, which means they are even more beautiful today than when they were made!

This error message is only visible to WordPress admins