“What glue should I use for this project?” We get asked this question pretty often, so it’s time to find out – contest style!

We put each glue to work in three tasks: bonding a polished stone to a base metal finding, sealing a knot, and creating a transparent raised surface.

Here’s an overview of how well each contender did: 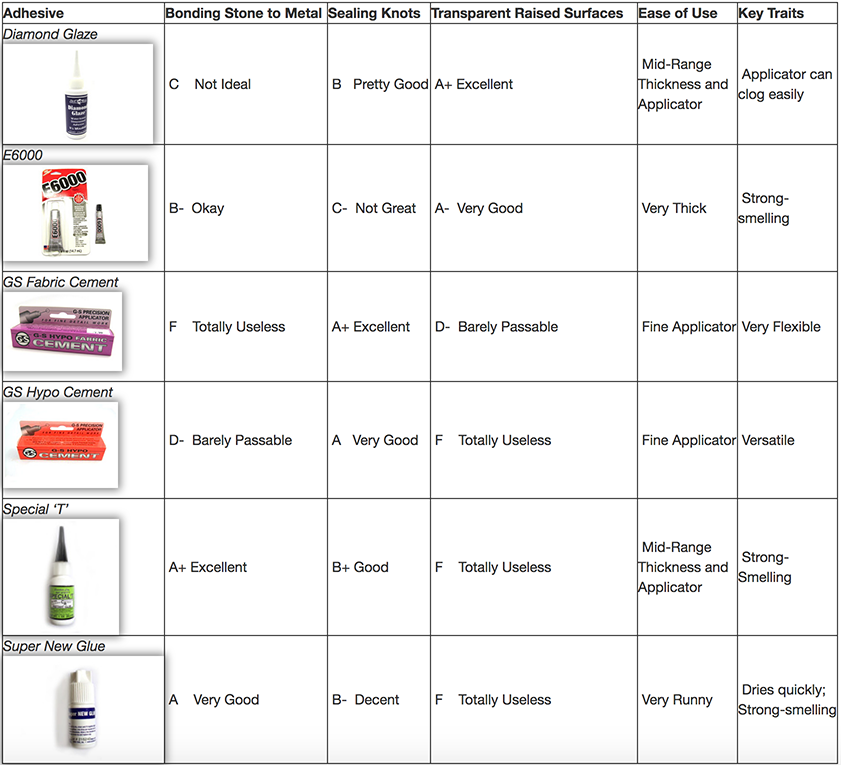 The best glues for binding two different surfaces together were Special ‘T’ and Super New Glue.  Special ‘T’ and Super New Glue differ in score only because of the drying time. Super New Glue dries almost instantly, which makes it very difficult to adjust placement, but it also means you don’t need to clamp it in place while it dries. Special ‘T’ dries enough that you can take the clamp off within a few minutes, but it has a tendency to ooze while it dries, so you need to be very careful about how much you use or it will bond your project to whatever surface it’s drying on! (For us, it dried to some fuzzy fabric, and the bit of glue with fuzz stuck to it could be flaked off once it dried, but we might have just gotten lucky there… Then again, we probably used a little too much of it.) All four of the other glues did poorly with this test because, even after 24 hours of drying time, the two surfaces could be pried apart by hand. E6000 gets a slightly higher score for being the thickest, making it the most useful for gluing irregular surfaces to flat ones.

Next was sealing a knot. By far the GS Cements were the best for this, as they remain flexible even once dried (which is especially helpful when gluing knots in elastic). The Fabric Cement does not seep into materials as much, so it gets the highest score as it will not affect the appearance of material cords as much. The Diamond Glaze, Special ‘T’ and Super New Glue all get B-range scores because they dry hard, which makes them a little bit brittle. However, it seems that they only really flake off the area around the knot and stay on the knot itself fairly well. The E6000 gets the lowest score for this test because it is thick and goopy, which means it makes a huge mess unless you use something like a toothpick to apply it, and it is the most visible after drying.

The final test was for making a raised surface resembling glass, such as if you were to put a picture in a frame and seal it in. (Ice resin is excellent for this if you want an extremely thick dome; this test is aimed at thinner, but still three-dimensional, fills.) The winner is Diamond Glaze in this category, as it dries clear, has few or no bubbles, and does not seep into paper (meaning it will not cause inks to run). E6000 gets a high score because it also dries clear and does not soak into paper, but it does have tiny bubbles in it that need to be carefully removed before it dries, which is unnecessarily arduous. The Fabric Cement gets a pass, but the applicator is so small that it would take ages to fill an entire project, so it’s far from ideal for this task. The other three all fail because they soak into paper and are far too runny.

There are some general advantages and disadvantages to each type of adhesive that are helpful to know. The GS Cements have very fine applicators which make them useful for detail work, but they are also very difficult to close as there is a pin in the lid that you need to thread into the applicator to avoid clogging or breaking it. Special ‘T’ and Diamond Glaze both have a mid-range consistency and applicators that can get clogged easily. Super New Glue, Special ‘T’ and E6000 are very strong-smelling and need to be used in well-ventilated areas. Super New Glue dries extremely quickly, so you need to be very careful not to get it on your hands or clothing.

To summarize, we recommend GS Fabric Cement for knots, Special ‘T’ for bonding two flat surfaces, E6000 for bonding irregular surfaces, and Diamond Glaze for creating transparent raised surfaces. If you are doing multiple types of projects, E6000 is the most versatile, with GS Hypo Cement being a close second.

This error message is only visible to WordPress admins